The Severe Damage Caused to the Tree and the Aftermath Post Strike.

Below you will find “linked” photos of the destruction made by The Strike. These Two are What I call “The First Sight” 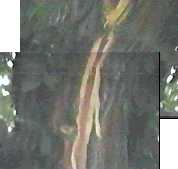 As you can see the tree was split in half by the electrical current that relentlessly pounded on the tree.  These video stills were taken on that same day, a few days later a crew was called to remove the tree because high winds split it more and made it unstable.  Eventually the tree began to sag into the street where it became a hazard. I kept a big chunk of the tree in my garage for 6 years, to a least have a souvenir of what once was a beautiful tree and a piece of The Strike’s destruction.  Its no meteorite, but just a momentum of that day in July of 1992.

If one were to listen to the audio I say “They say lightning doesn’t strike twice in the same place, I hope that holds true, AT LEAST NOW!”  and boy did I mean that. I also stated, “This tree is one of many, I hope it doesn’t fall.” But to no avail it was starting too and had to be removed.

What an erie feeling I felt standing next to the tree with a video camera, knowing that just a few minutes prior it was severely struck by a tremendous lightning bolt.

Shown in these frames is the destruction that was caused in a moments time.  This thick tree is no match for the power of a strike, imagine what damage it can do to your home or to you for that matter.  My full respect and admiration goes out to all those who have witnessed its dangerous power first hand and lived to tell us all about it.

Once again, I will state that, “I will never forget that zipping sound that I heard moments before I had the urge to focus on that tree.”  It is a very distinct sound and if ever hear it again, I’ll know what to expect.