As I was filming in the back of the house during a thunderstorm, I heard a peculiar “zipping” sound and I said, (which can be heard on the tape) “That’s not normal, that, that…” and before I could say the word “sound”, BOOM it struck a tree 50 feet away and scared the living daylights out of me.  I slightly jerked the video recorder, but managed to hold my ground and immediately responded with “Aww man, Aww Man, I Got It On Film™” and the rest is history!

This happened in 1992 and now, years later I have decided to not just sit on this gift, but to share it for all to see and study.  The millennium has come and gone fast with a bang, and no better way to showcase it.  Enjoy! 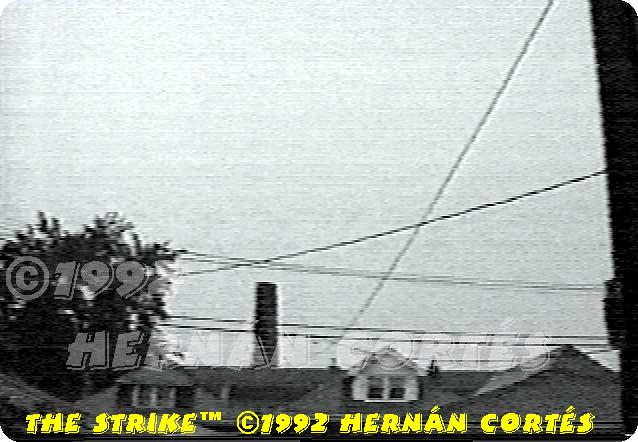 Frame 1 above is the “calm before THE STRIKE”.  It is the actual frame before the step leader strikes as shown in frame 2 at below. 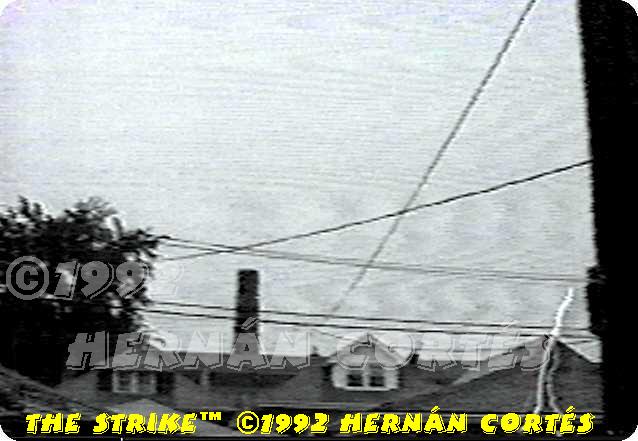 Then the spectacle begins in frame 3 and continues from frame 4 through multiple frames with frame after frame of pure sizzling power and magnificent action. 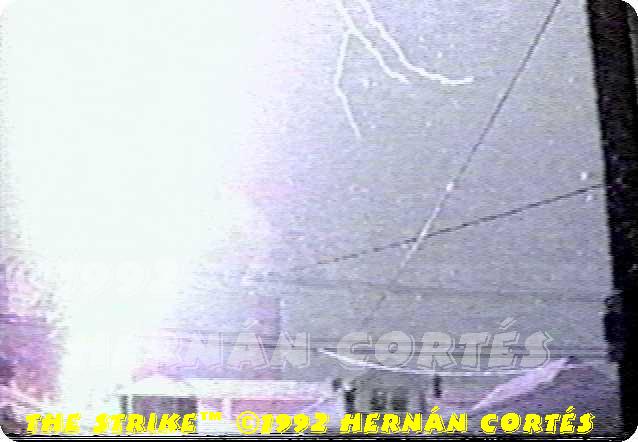 These still frames of action with 12 actual strokes makes these TWELVE STRIKES a rarity of nature that could not be seen with the naked eye. 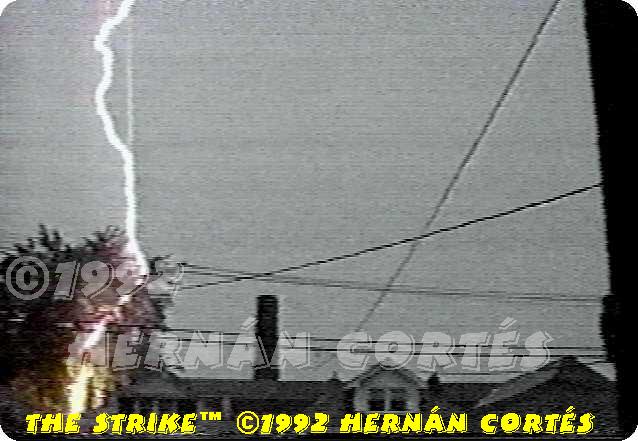 Luckily, and I mean LUCKILY, they were captured on video and transferred to these still frames with the remarkable use of technology used to process these incredible frames of action.

SEE THE STILLS BELOW AND THE DAMAGE IT CAUSED.

See the sizzling action frame by frame as the lightning strike and the 11 return strokes are shown in the frames below:

The Strike™ has been on DA TV nationally in the prime time news, worldwide in 5 documentaries, 2 prime time shows, 1 Academy of Science promotional announcement and 1 promotion for an entire week of top notch shows.  Soon more will follow.  I have received numerous requests for the Copyright of this spectacular video footage, but will not give it up, it is worth too much to me.  This is a once in a lifetime type of material and it does not come cheaply.

Now I have sat on it for over 30 years now and believe that is was a gift for all to study, admire and learn from and I was just made the courier.  Now I am making it available to you to study and learn.

All THE STRIKE pictures shown here or  on subsequent THE STRIKE (www.DaStrike.com) web pages are Copyright 1992 by Hernán Cortés and no consent of use is implied on this website.  All requests for licensed use must be requested via email to Hernan AT Cortes.com and subsequently via U.S. mail.